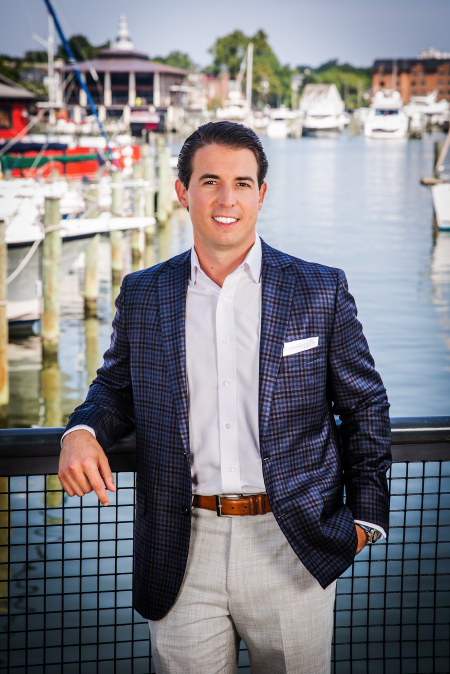 John brings 15 years of experience to Rosso Commercial Real Estate Services. He has handled over $200 million in sales and leasing transactions and has been named by CoStar Group on five occasions as a “Power Broker”, both for Retail & Office transacions in the greater-Baltimore market, making him uniquely qualified as a true “full service” commercial real estate professional. John specializes in the representation of retailers/restaurants, professional/medical businesses and industrial businesses, and assists these clients find & secure commercial real estate in the greater-Baltimore region. He also specializes in representing commercial property owners and developers acquire, dispose, and lease commercial property.

John graduated from the Robert H. Smith School of Business at the University of Maryland with a Finance degree. At Maryland, he was a member of the national fraternity, Phi Delta Theta.  In 2019, John achieved the SIOR designation, which is a professional achievement for highly-qualified commercial real estate practitioners with a strong and sustained transactional history in brokerage, fee-based services or executive management.

Additionally, John was appointed in 2017 by then County Executive Steve Schuh to serve on the newly created Agricultural-Tourism Commission focused on maximizing economic development in Southern Anne Arundel County while preserving its rural nature.

John lives in Annapolis, MD with his wife, Priscilla, and two sons, Jack and Hayes. 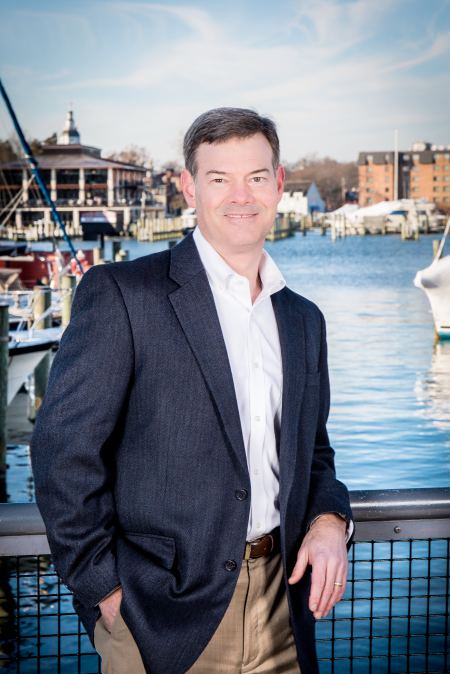 Gene spent 26 years with Continental Realty Corporation (CRC) in Baltimore, MD. Gene held many operational and executive roles at CRC, including 10 years as President. CRC owns and operates shopping centers and multifamily apartments throughout the Mid-Atlantic and Southeast U.S. and has more than $2B in assets and 300 employees. Currently, Gene also serves as COO for Greenberg Gibbons. Greenberg Gibbons is one of the Mid-Atlantic region’s premier developers of mixed-use, town center and retail properties

Gene has a B.A. from Towson University, an M.S. in Real Estate from Johns Hopkins University and an M.B.A. from Loyola University Maryland where he was named to the Beta Gamma Sigma business honor society. Gene also holds Maryland, North Carolina and South Carolina real estate broker licenses.

Gene is a graduate faculty member at Johns Hopkins University and Georgetown University. He has taught numerous commercial real estate courses, to both full and part-time students in Washington, D.C., Baltimore, and online, and is a student capstone advisor. Gene has also been deeply involved in curriculum and online course development and has designed his own university courses, including a course for NAIOP. Gene has been a guest speaker on real estate topics throughout the industry, including lecturing at the University of Baltimore, Temple University and the College of Charleston.

Gene serves on the boards of two commercial real estate firms in the Washington, D.C. area, The Chevy Chase Land Company and Royco Properties. Gene also spent 16 years on the board of Integrace, a non-profit which owns and operates continuing care retirement communities throughout Maryland, including three years as chairman. Gene is also an active volunteer firefighter/EMT, serving both at Lutherville VFC and Earleigh Heights VFC. As a firefighter, Gene has been a top 10 responder, fire sergeant, trainer, mentor and led recruitment as chair of a membership committee. Gene was also a U.S. Marine receiving an honorable discharge in 1995 after receiving meritorious promotion to sergeant.

Gene lives in Severna Park, MD with his wife, Jeanne and son, Tommie. Their son Jimmy lives in Washington, D.C. 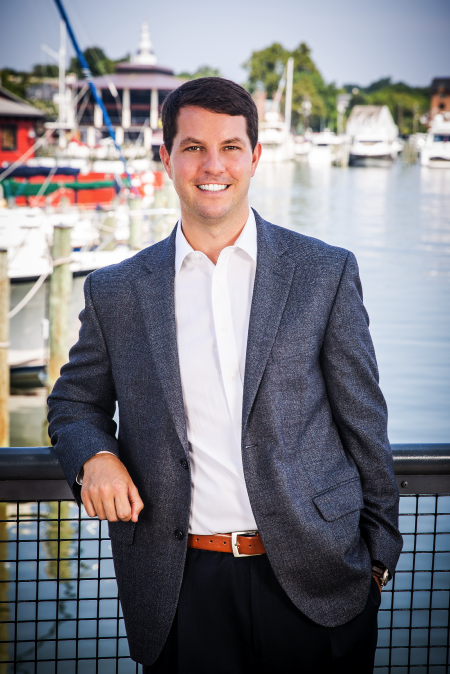 Ryan brings 6 years of experience to Rosso Commercial Real Estate. Ryan has handled over $50,000,000 in sales and leasing transactional value.

Ryan represents Retail/Restaurant, Industrial, and Office/Medical clients, and handles the Sales & Leasing of Office/Medical, Flex/Warehouse, Retail, and new development projects in the Baltimore-Washington Corridor. Prior to working with Rosso Commercial, Ryan served as Vice President for Murphy Commercial Real Estate for several years. Prior to Murphy Commercial, Ryan worked for the E&J Gallo Winery out of California.

Ryan graduated from Fairfield University in Fairfield, CT with a degree in Marketing and Management. He was a Division I Lacrosse Scholar Athlete.

Ryan currently serves as the President for the AACIA (Anne Arundel County Commercial & Industrial Association), former 40 under 40 for the Cystic Fibrosis Foundation, member of the Building Traditions Society (Anne Arundel Medical Center), & recently started a Pancreatic Cancer Fundraising Walk in Annapolis by teaming with the non-profit, The Lustgarten Foundation out of New York.

In his free time, Ryan enjoys running, playing golf, watching Ravens football and Orioles baseball, and spending time at the beach with his family. He currently resides in Annapolis with his wife, Kelly, and two daughters, Savannah & Pippa. 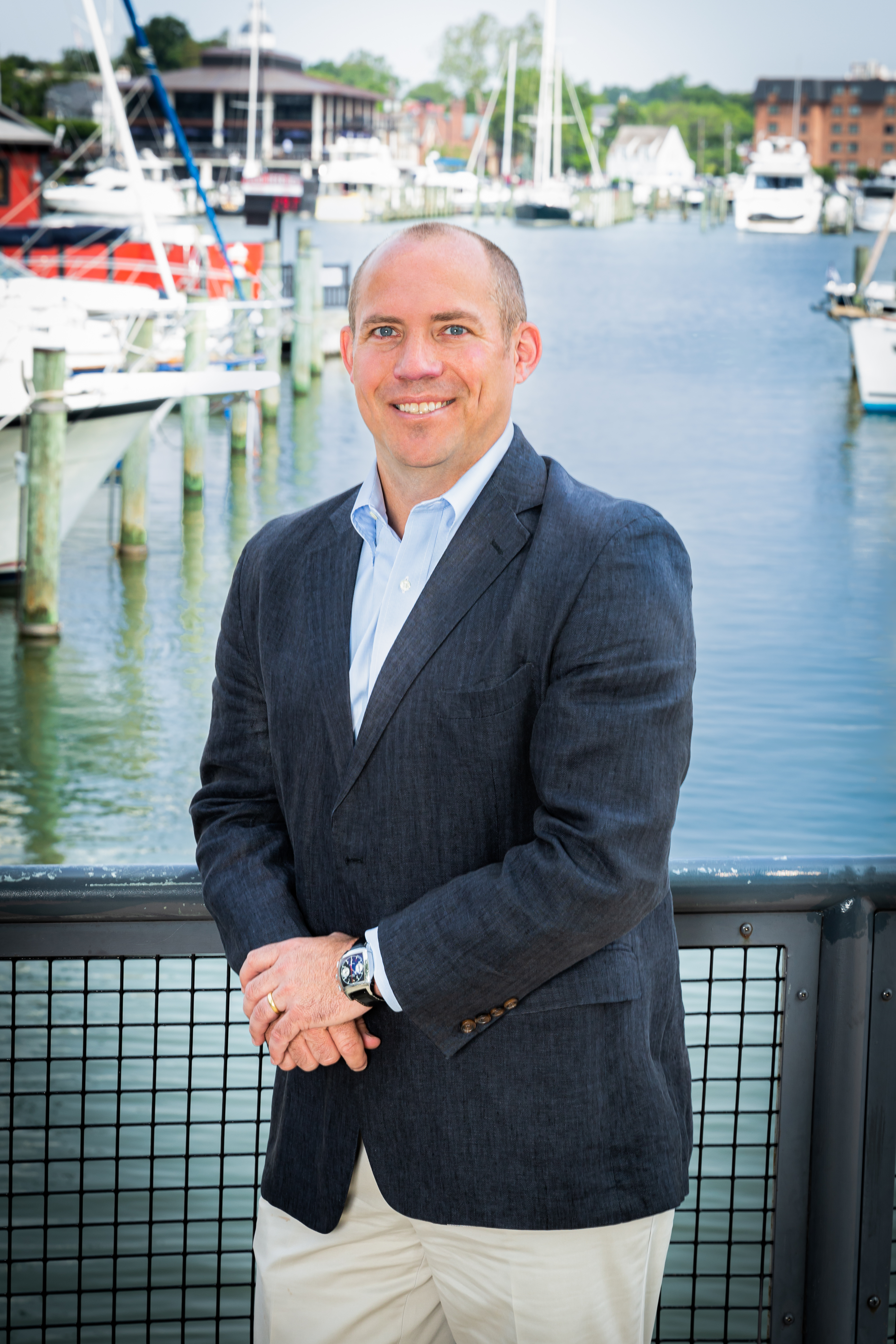 Colin is a Vice President with Rosso Commercial Real Estate Services and licensed in MD, DC & VA. He brings eight years of brokerage experience in the region to Rosso, having spent those years in Washington, DC with The Ezra Company and representing clients throughout the mid-Atlantic. Colin works tirelessly to identify opportunities and negotiate solutions for his clients. Throughout this unique process, he assists clients to develop a strategic and comprehensive plan specific to the real estate needs of their organization.

Colin’s depth of professional experience is in a variety of capacities involving contract negotiation, development, marketing and project management over the last 15 years. With clients such as The Association of Zoos and Aquariums, Gentle Giant Moving & Storage, Epsilon Inc, EDF, Brodeur Partners, Montgomery County Chamber of Commerce, by George Hospitality, Anduril Industries, Aitheras, The Discovery Channel, Coca-Cola, Kozmo.com, UrbanFetch.com, AT&T, 2U and American Continental Group, Colin developed a unique skill set to foster relationships with his clients. Being able to understand the long-term objectives and strategies of his clients, Colin and his team have a distinct advantage in the market.

Colin is a graduate of St. Lawrence University in Upstate New York and prior to Rosso played professional soccer in Ireland and in the United States. Additionally he has coached at the youth levels and also spent 5 years as an Assistant Coach at The George Washington University. His vast experience in managing people as well as small and large companies alike, makes him a tremendous asset to any organization looking to save money and leverage opportunities when it comes to managing their real estate. He is also of the mindset that his experiences along the way from attending the 2002 Winter Olympics with an entrepreneurial class at GW to skydiving with colleagues on the Discovery Channel EcoChallenge Tour were times he learned best about the variety of experiences that develop our understanding of opportunities not often taken easily.

When not in the office or working with a client, you will always be able to find Colin close to a soccer ball in one capacity or another or spending time with his two daughters, Katharine (15) and Aoife (11), in the youth sports of Annapolis, where he resides with his wife of 16 years, Laurel. 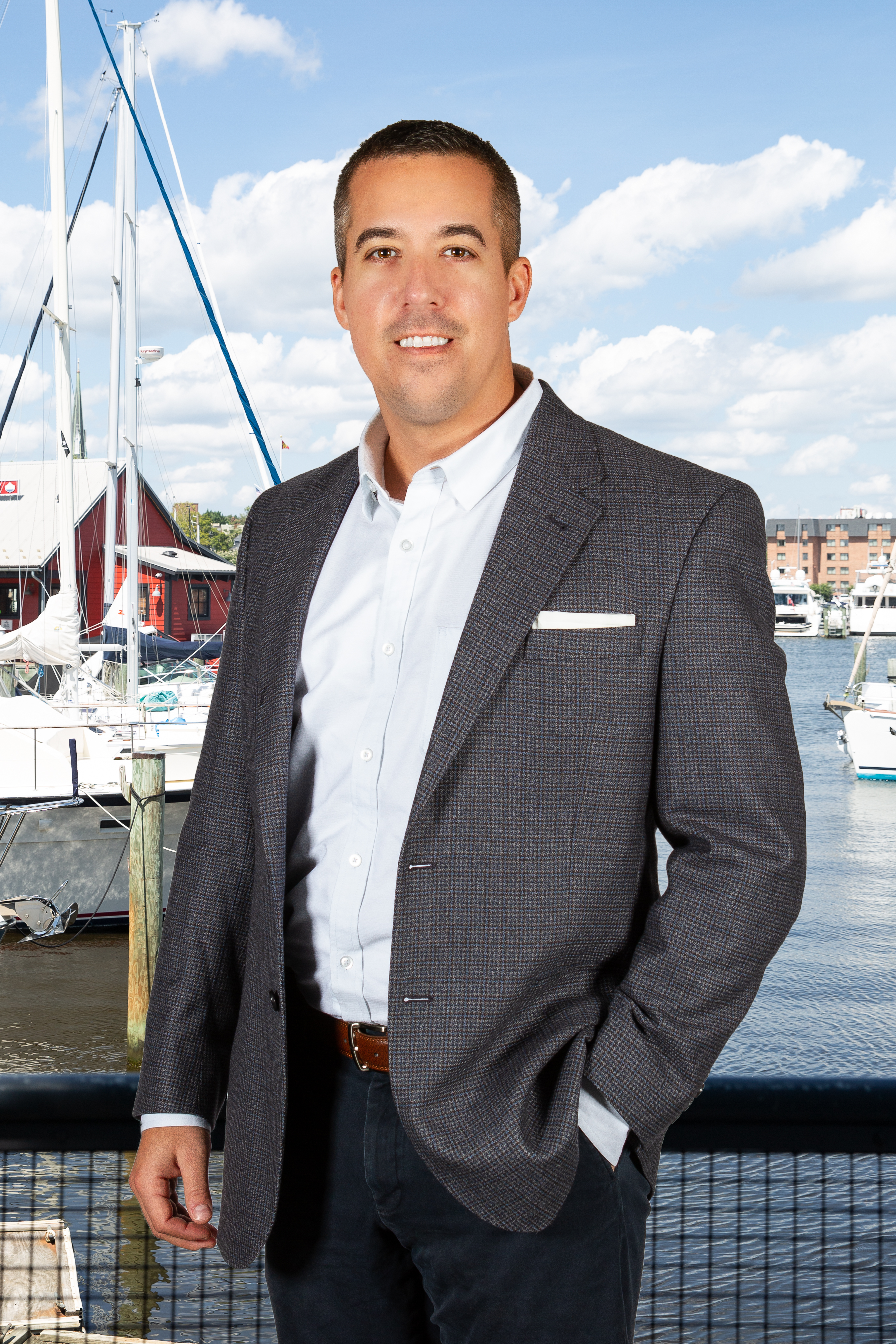 Ross brings 5 years of commercial real estate experience to Rosso Commercial, with prior experience in the valuation of commercial real estate. Over the past 5 years while working for Westholm & Associates in Annapolis, Ross’s clients have included banks, investors, developers and the Government, among others. Prior to his work with Westholm and Associates, Ross worked for Telga Corporation as a regional manager where he negotiated energy contracts between business and property owners and electricity and natural gas companies.

Ross’s experience brings with it a unique blend of both an intricate knowledge of the market forces effecting commercial real estate, along with a keen understanding of the needs of a commercial client.

Ross was born and raised in Murray Hill in Annapolis where he graduated from St. Mary’s High School before going on to graduate from Towson University with a B.S. degree in Law & American Civilization.

When not in the office or working, Ross enjoys spending time with his wife and their dog, competitive sailing, and running, Ross recently completed his first marathon. 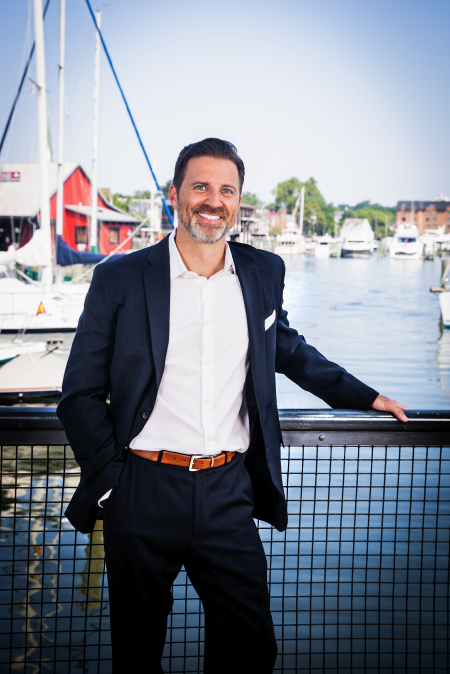 Mike has more than fifteen years of commercial real estate experience with concentrations in brokerage, investment, and management. As Principal of Foundos Realty, a commercial brokerage headquartered in Annapolis, Mike assists clients in all stages of the real estate life cycle, manage office and retail assets, and facilitate investments . He is also the creator of TheCapScore, a proprietary algorithm that provides customized capitalization rates and valuations for any commercial property in the US. Prior to a career in commercial real estate, he was advertising campaign manager for a technology startup that was later acquired by AOL.

He comes to Rosso Commercial as a Vice President and focuses on strategic partnerships and development of cutting edge marketing tactics. Mike’s unique background in both commercial real estate and technology allows him the ability to provide another layer of value to clients. Advanced knowledge of investment analysis and proficiency with design and web development, gives Rosso CRE clients a greater level of service.

Mike has a Master of Science in Commercial Real Estate from The Johns Hopkins University, and a Bachelor of Science from the University of Maryland, College Park. 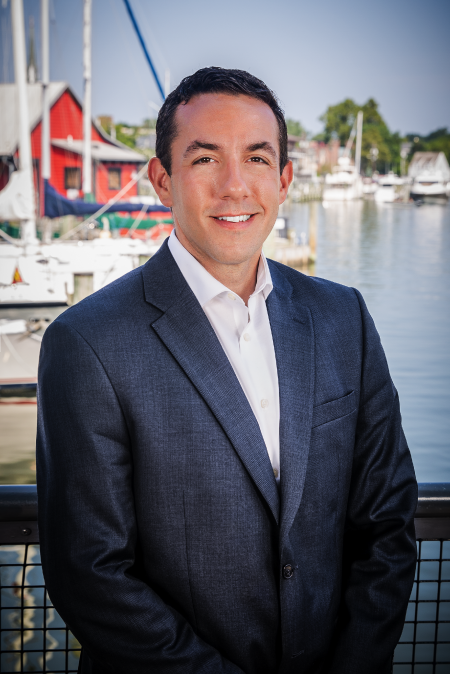 Christopher graduated with a Finance degree from the University of Pittsburgh and has an MBA from Loyola University. Prior to starting his firm, Christopher worked for M&T Bank and managed their retail and office portfolio for the Mid-Atlantic Region. Chris is also involved with the Rotary, AIAC, and Community of Strength Project.

He lives in Severna Park with his wife and two children. 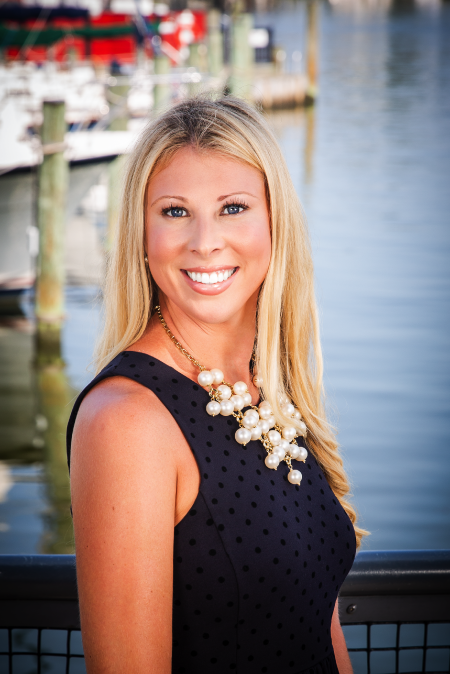 With Rosso Commercial, It's Personal.

When you’re ready to take your business a step further, we’re here to help you make the move.